A dozen of friends went to see a show.
After the show, some of them went into a restaurant for a midnight snack.
“Put it all on one bill,” they told the waiter.
The bill amounted to $60.00, and the men agreed to split it equally.
Then it was found out that two of them had slipped away without settling their debts, so that each of the remaining men was charged $2.50 more.
How many men were in the party that went to the restaurant?

Alice and Bob inherited a flock of sheep.
They sold the entire flock, receiving for each sheep the same number of dollars as there were sheep in the flock.
The money was given to them in $10 bills and some change.
They divided the bills by dealing them out alternatively; Alice complained that this was not fair because Bob received both the first and the last bills, thus getting $10 more.
To even things up, Bob gave Alice all the change, but Alice argued that it was still unfair.
Bob agreed to give her a cheque for the difference.
What was the value of the cheque?

Hint: try to figure out what the last digit of the amount paid could be, if this amount is a square and has the next-to-last digit odd (implied by an odd number of $10 bills).

Alice has many grandsons: among them there are Bob (who is a strong athlete) and Charlie (who is a little boy); being in charge of birthday parties, she noted that, in 2017, the ages of both will be equal to the sum of the digits in their birth years.
What years were Bob and Charlie born in?

It took 9 people 5 hours to unload 3 identical pickup trucks.
How many hours will it take 10 people to unload 4 trucks with the same load? How long if the load of each truck is increased by 1/6? 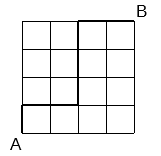 John wishes to walk from corner A to corner B through streets as in the following street map. A route from A to B is a combination only of northward segments and eastward segments; an example is shown in bold on the map ([N,E,E,N,N,N,E,E]).
Note that at any corner John has only two choices; actually he can neither go backward, nor increase the distance from destination.
How many routes are there from A to B available to John?

Let be the set of natural numbers whose digits, in decimal representation, are chosen from {1,2,3} such that no digit is repeated.
Find the sum of all these numbers and put it in the box below.

Paula and Joan were selling oranges and, each day, they had an equal number of fruit but Joan had larger ones and sold them at the rate of two for a dollar, while Paula sold three of hers for a dollar.
Each lady expected to sell her fruits completely (with no oranges left).
Paula had to leave for a day and asked Joan to dispose of her stock.
Upon accepting the responsibility of disposing of her friend’s stock, Joan mixed them together and sold them off at the rate of five oranges for two dollars.
When Paula returned the next day, the oranges had all been disposed of (not one remained), but when they came to divide the money, they found that they were just seven dollars short with respect to the money they would have earned selling oranges separately.
Anyway, they divided the money equally, each taking one-half.
Find how much money Joan lost by the unfortunate partnership.
Enter your answer, as an integer number (of dollars), in the box below.

(Taking into consideration divisors and common multiples could be helpful.)

Three children agreed to share a bag of chocolate in proportion to their ages.
The sum of their ages was 23 years, and the bag contained 92 chocolates.
For every 4 chocolates Alice took, Bob took 2; for every 5 Alice took, Charlie took 4.
How many chocolates did each child take, and what are the respective ages?